We believe everything with a heart beat deserves a chance at life. We will give anything a go.

How You Can HelpMake a Donation

As a little tacker Rose was forever bringing home injured or orphaned animals to look after. 17 years ago she was given her first joey to raise, named Bunty. A farmer had found this little joey in the pouch of the mother kangaroo that was deceased on the side of the road and Rose was able to hand raise Bunty.  Since then Rose has been caring for other injured or orphaned wildlife such as possums, echidnas, kangaroos, koalas, birds …  if it has a heartbeat, it is worth a go!

The BWR averages 485 rescues or callouts each year – most of them we have been able to nurse back to health and either release back in the wild or find a home for them at other homes or wildlife sanctuaries.

To have a sustainable wildlife organization within the Barossa valley area with a dedicated team of volunteers who work towards the rescue/rehabilitation and release (where possible) of wildlife.

Educate the community and also promote further opportunities on education choices for our younger generations. 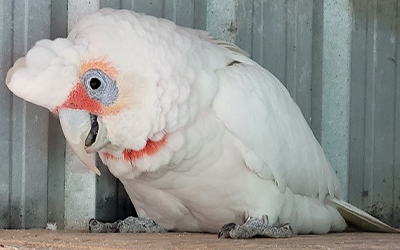 The story of Reggie our Long Billed Corella

The story of Reggie our Long Billed Corella.

END_OF_DOCUMENT_TOKEN_TO_BE_REPLACED

A huge congratulations to our mentor, inspiration and leader Rose Brooks being awarded the 2022 Active Citizen of the Year by the Barossa Council.

END_OF_DOCUMENT_TOKEN_TO_BE_REPLACED

2021 was a very busy year for Barossa Wildlife Rescue with 598 animals rescued and over 400 calls for advice or assistance.

How You Can Help

Any donations will be put towards food, veterinarian expenses, electricity bills (the infant animals require constant heat) as well as repairs to fencing and enclosures.

Your generosity and support will go a long way to ensure these animals all have a fighting chance of survival.

Our Volunteers are dedicated members of BWR who work together in a Team to provide assistance to the day to day operations of the rescue centre.

We appreciate the support of local businesses who contribute goods, services and their time to support our organisation.